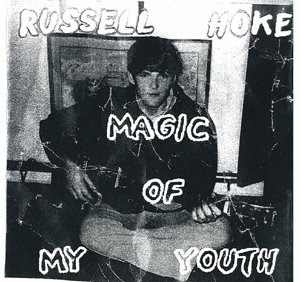 In 2003, Chris King of Eleanor Roosevelt passed me an odd, mysterious CD-R by Russell Hoke called Magic of My Youth. It has a xeroxed cover and very little information beyond the song titles and dates. I later posted a song by Hoke on this blog, lamenting the fact that he never released anything on vinyl. Hoke soon got in touch to let me know that he did in fact do a tiny vinyl edition of another collection called Cosmic Outlaw. Pressed in an edition of 100 copies with handwritten song titles, the album is now hopelessly rare.

In 2009, Hoke belatedly released Magic of My Youth on vinyl, again in an edition of 100. The only place to buy copies is directly so contact him at at Russnbus@yahoo.com for for more info.
Posted by Mark at 8:13 AM 1 comment: