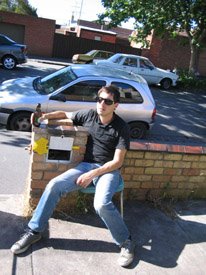 Sometime around 2001 I started up a record label to release a 7" by my then-favorite local band, Mates of State. After that single quickly sold out,it was apparent that Mates of State had outgrown the confines of little indie labels like mine. So without any artists to promote, I began attending shows in San Francisco looking for cool new bands.

I think I saw the Mosquitoes at the Edinburgh Castle, a Scottish pub in San Francisco that hosted big-screen soccer parties and shambling indie shows. I was drunk and tired when I saw the Mosquitoes, but their show captivated me nonetheless. They reminded me of the Bartlebees and the Television Personalities, indie pop bands with great songs and shoddy instrumentation. I talked to the Mosquitoes singer afterwards and he gave me an untitled, handmade CD with the songtitles written on a little card inside.

Last month I looked up the band and found out some real details. The band is largely the work of Drew Cramer, a San Francisco free-spirit who has worked as a gardener and dessert chef to pay the rent. He is a firm believer in DIY and does almost nothing to promote the band beyond playing the occasional show.

The band is bigger in Australia, where the Lost and Lonesome label has issued an official CD. Check the website here for more info and an interview with Cramer.
Posted by Mark at 9:54 AM 1 comment:

New post coming soon. In the meantime, there are two new fantastic blogs out there catering to the psych crowd. I highly recommend you check these out:

Acid Dazed
It's Psych
Posted by Mark at 2:10 PM No comments: