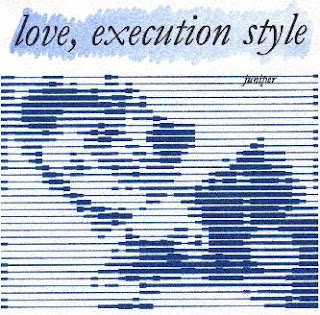 Rock and pop have never been immune to grand gestures and high-concepts, but a humble genre like indie pop would seem to be mutually exclusive with anything resembling a press angle or marketing hook. And yet, some of the most outsized ideas sprang forth from bedroom popsters in the '90s. Sufjan Steven concocted the fifty states/fifty albums project, the Magnetic Fields released the self-explanatory 69 Love Songs double CD, and LMP recorded a cover song for every year between 1900 and 2000. The little guys, it seems, like to dream big too.

Love, Execution Style, a one man band based in Tennessee, coined his own unique proposition in 1997: custom made music. The man behind LES has made a half-hearted effort to hide his identity (which I will honor here), although he freely communicated with many of the people who took part in his project, some of which include Dark Beloved Cloud label owner Douglas Wolk, Brian Weitz from the Animal Collective, and many TV producers looking for a cheap theme song.

The deal was that a customer could provide specifications—as few or many as desired—for a song, and LES would write and record an original song and send it to the person, all for only five dollars. From 1997 to 2007, LES recorded nineteen custom made songs for the project. Tracks were commissioned for two television shows, a radio program, and two short films, one of which was broadcast on the Documentary Channel. One track served as the theme song for an Internet service provider; another ("Punk Rock Comedian") was used as runway music for a man in a bachelor charity auction. Other songs were used as love tokens or birthday gifts.

There are a few songs that have a particularly interesting history. "One Song Not about Pain," was requested by Brian Weitz for his friend Ruth, a huge John Cusack fan who later started a film career. Another track, made for a weekly radio show in Chattanooga, changes genres every few seconds as a tribute to "Speedfreaks" by Naked City.

The song commissioned by Wolk is particularly bizarre. It was requested for a friend who had just earned her PhD in mathematics. After discovering that her thesis was about Markov chains, LES used a random number generator and probability matrices based on "Pomp and Circumstance" and "Y.M.C.A." to create the melody. The details are in a paper entitled "Faster than a Calculator—or Using Markov Chains for the Construction of New Wave Music" which may be read here.
Posted by Mark at 6:10 AM