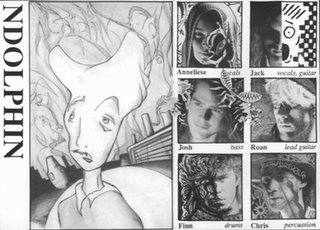 Whatever you are listening to at the age of 14 will forever have a place in your heart. When I was 14, a friend of mine went up to Gainesville, Florida, the nearest hip college town, and came back with a mix of college bands that blew my mind. Aleka's Attic, River Phoenix's band was on there. Henrietta's Lovers, an artsy funk band with a singer who played trumpet, was on there. Ndolphin, a neo-hippie band with male and female singers was on there. I devoured it all without discretion. The big regional trend in Gainesville at the time was percussion, and all three bands had bongos on their songs. I thought it was the coolest thing I'd ever heard.

Ndolphin was a short-lived, though popular Gainesville band; they released two EP's between 1989 and 1991 and then broke up. The main songwriters were Ane Diaz and Jack Mason; both sang. After Ndolphin split, Diaz sang with a succession of bands including Sumac and the Causey Way. She now plays in an intriguing duo called Producto. Mason also played in Sumac, but eventually left the music business entirely, as far as I can tell from my research. Another notable band member is Josh McKay, who played bass on the band's first EP but left soon after.

The band's first EP, which is pictured above, is an incredibly solid set of neo-psychedelic gems with one period piece folk/rap hybrid about hating George Bush. Too bad every word of it still rings true today. The band's second EP, called Wail, is less developed than its predecessor, but still has moments of brilliance, especially the opening three songs. Good luck finding either of these tapes. They were released in tiny editions and are virtually impossible to find. Thank god some mystery person uploaded this mp3.
Posted by Mark at 7:59 PM

I had the great fortune of working with both Jack Mason and Ane Diaz separatley and individually during the early 90's Indie and Progressive music explosion in Gainesville, Florida.

With Jack I frequently lended my backing vocals to his solo project The Space Masons and jointly in the a'capella quartet Sumac under the direction of singer and performance artist Jill Burton.

These two individuals are forces to be reconned with on their own as well and it was a huge impact on my work as a singer and musician to have had the honor of working with each of them.

I found this post in the process of looking around for Space Masons stuff. Had an NDolphin bootleg at some point, but it is long gone I think. Anyone come across any live Space Masons stuff? Heard Jack Mason is back in Gainesville.

I found this looking for something about old bands I loved in Gainesville like NDolphin and Emperor Moth... I still have my Emperor Moth CD and have converted it to mp3....
I think the last place that Emperor Moth played was at the club downtown called 'Netherworld'
...ahh, the trip down nostalgia lane... thanks!

I have a lot of sound sources of Josh Mckay.

JOSHO MISHO 3track
1.Tropical Lip V.D
2.The True Meaning And Purpose Of Life
3.When You're Not Here

Bill DeYoung, the editor of Scene magazine for The Gainesville Sun through most the '80s and '90s, just sent me a CD of NDolphin. He tells me he complied the CD mostly from masters at Mirror Image Studios. The CD also includes 2 Space Masons tracks. The sound quality backs him up on the source material. Great, great stuff.
Thanks Bill!

Bill DeYoung, Scene magazine editor for The Gainesville Sun in the '80s and '90s, just sent me a CD of NDolphin material. He says he got much of it from master tapes at Mirror Image Studios before he left town in 2000 or so. The CD also includes 2 tracks from the Space Masons. The sound quality is amazing. Great, great stuff. Thank you Bill!

I have tried to look for ndolphin´s music for ages. it´s a real surprise to finally found their songs online. Thank you very much. Thats so awesome.@ miceparade, could you upload those Joshomisho tracks? Thanks!

I learnt the thing that was able to be downloaded now.
We want to express our gratitude.

It is interested in CD of NDolphin.
Will you exchange it for the sound source that I have?

yes.
Can you contact me?
Could you teach E-MAIL?

Hi Mark,
sorry to use your comment page to get in contact with "micaparade" but i cant figure out the other way. sorry for the inconvenience. @ miceparade, are you maybe my japanese friend i have lost contact? anyways, my email is: flowers_of_peace@yahoo.de. Thanks!!!

I lived in Gainesville from '88-'91, and still remember many of the lyrics to Sumac songs, in particular:

"Yesterday's a flying thing/and it never returns/sit and cry for angels/who hide and watch you suffering."

Gives me chills to this day. I had a tape of Sumac and Aleka's Attic, but it was long ago absconded. Anyone have any Sumac tracks? Where is Ane?? I think she has one of the most beautiful and compelling voices ever. Glad to know she's still out there serenading people with her gorgeousness.

And what about the Tone Unknown? It was always a guaranteed happiness to see them at the Artitorium (I lived on the first floor in the back, and could watch from my window).

any way to get a higher-res copy of the cassette sleeve?

Lost my tape ages ago... wish you coudl also upload all the tracks!!!

Hey there - I played the violin in Space Masons and have some stuff on CD. Email me if you want it Ryan at Kimikosita@aol.com

Hey Ryan - I played violin in Space Masons and have some stuff on CD. Live and recorded. Email me if you want it.

On a visit to Gainesville from my native UK back in 1994, I bought the Ndolphin cassette featured at the top of your article.

I still have it. But think it is a shame that it isn't available in MP3 form.

Kimiko said...
Hey Ryan - I played violin in Space Masons and have some stuff on CD. Live and recorded. Email me if you want it.


i run the Gainesville Music Archive and I have been looking for space masons stuff. If you see this could you send me some tracks at gvillemusicarchive@yahoo.com